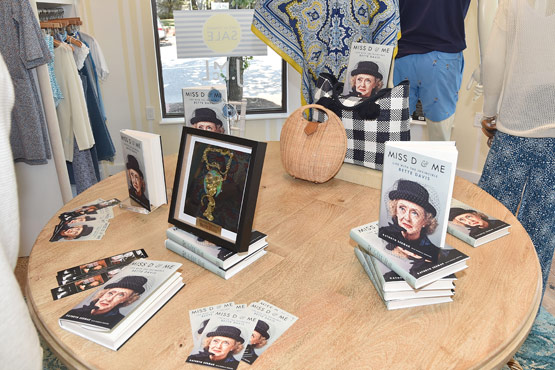 Very hot, yesterday in New York although the humidity was a not as bad  as it’s been in these last few weeks.  The city was even quieter than I would have thought on a Thursday afternoon. Probably many people taking their vacations now and getting out of town.

Bette Davis eyes. Out east at Southampton last Friday at J. McLaughlin’s store at 2 Jobs Lane, they hosted a book signing for Kathryn Sermak, author of Miss D & Me, Life with the Invincible Bette Davis. Ms. Sermak had been a featured author at the 2018 East Hampton Library’s “Author Night,” telling her story as personal assistant of Miss Davis who was a force off-screen as well as on. She was a hardworking pro who expected as much from those she worked with and was unabashed about making that known,  a larger than life talent determined to live her life on her own terms.

Movie stars of Bette Davis era were famous for some particular quality. Davis was known for her gutsiness in her roles. She was known to her audiences as tough, yet earnest with a willingness to play unsympathetic characters in a wide range from melodramas to historical and period films, as well as suspense and romantic dramas. She arrived in Hollywood in 1930 – from the New York stage – when she was 22. Two years later she signed on with the Warner Brothers. Two years after that, this young woman who screen-tested several times before the studio executives thought she had a chance, starred in the film version of Somerset Maugham’s “Of Human Bondage,” a classic to this day.

By the 1940s she was one of Hollywood’s biggest stars, nominated for Oscars ten times, twice winning the Academy Award for Best Actress. She was also the first woman to received a Lifetime Achievement Award from the American Film Institute. She was famous in the industry for fighting for what was best for her, and delivering with highly memorable performances in such film classics as “The Petrified Forest” (where Humphrey Bogart made his film debut), “Jezebel,” “Dark Victory,” “The Private Lives of Elizabeth and Essex,” “All This and Heaven Too,” “The Letter,” “The Little Foxes,” “The Man Who Came to Dinner,” “Now, Voyager,” “Mr. Skeffington,” “All About Eve,” “The Star,” “The Catered Affair,” “Hush Hush Sweet Charlotte,” “Whatever Happened to Baby Jane,” to name only a few of the films that people went to see Bette Davis.

The personality was so powerful that no matter the role, she dominated because you couldn’t ignore her. Graham Greene once wrote about her: “Even the most inconsiderable film … seemed temporarily better than they were because of that precise, nervy voice, the pale ash-blond hair (later brunette), the popping, neurotic eyes, a kind of corrupt and phosphorescent prettiness … I would rather watch Miss Davis than any number of competent pictures.”

She was married four times and it is telling that she called her best-selling memoir “The Lonely Life.” It is also telling that her daughter B.D. Hyman wrote a book about her mothering that was highly controversial, to put it politely. Davis was hurt and outraged by it and didn’t mind telling the world what she thought. She responded by pointing out that she had financially supported her daughter and would be continuing to now that the daughter had written a best-seller about her motherhood.

I never met her when I lived out there. I saw her speak once for a Film Institute lecture. She was in her late 70s, if not 80. The character delivering the lecture was instantly recognizable as the character who made her film roles famous to the point of parody. She was commanding, outspoken about herself and her world, arch with her sarcasm as you would expect, and entirely Bette Davis. For the audience it was a piece of cinema history and a thrill of a lifetime.

Watching her, listening to her, I could imagine that as a “mother” she might have been very difficult for a child to understand to the point where she might not even have been aware of the child’s puzzlement. This is quite common in life, as we know, and parents who not only personify but portray authority can easily be misunderstood when it is directed at one’s child. I’m not taking sides but it is also true that the role of Mother is the most challenging of all in life for all the right reasons. A woman who also was married to, and possessed of a successful career, is doubly as challenged, and often not as successful as they would wish.

Nevertheless I can imagine that Ms. Sermak’s experience must have been equally as energizing. Her role was one in which all is revealed by the Star Player. Davis had that personality on-screen and off-. She also had the other side of tough in equal content: soft. Her four marriages must have been very disappointing to a woman of her sense of self-respect. And a sadness. No doubt the author saw all of that too.

Kathryn Sermak has also had an interesting professional life herself.  Now the co-founder of the Bette Davis Foundation and co-executive of the Bette Davis Estate, she has had unique career as personal assistant also to HIH Princess Shams, the eldest sister of the late Shah of Iran. Shams lived most of her life in the last half of the 20th century in Beverly Hills and Santa Barbara. Sermak also worked for Isabelle Adjani, the French star; Pierre Salinger; Buzz Aldrin, Berry Gordy among others. People from various walks of life, unrelated except by the peculiar experience of Fame and Fortune. That kind of professional experience observing all that provides its own authority.

Meanwhile, back at J. McLaughlin in Southampton that Friday last week, guests had a meet and greet with the author book signing. 15% of sales during the event went to the Bette Davis Foundation which raises funds to award scholarships to support the creative dreams of aspiring actors and actresses.

Click to order Miss D and Me: Life with the Invincible Bette Davis.