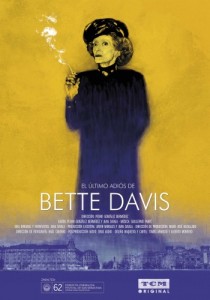 Every year, the Spanish Academy celebrates the quality of Spanish cinema by presenting the Goya Awards (similar to the US Oscars) to the best professionals in each of the technical and creative categories. ‘The Last Farewell of Bette Davis’ has been nominated for Best Documentary Film. The ceremony will be held on February 6, 2015.

The compelling documentary pays homage to Bette Davis. Miss Davis’ last days were spent at the San Sebastian Film Festival. The documentary retraces and reconstructs her final days through eyewitness testimonies. Personal memories are shared for the first time from journalists, photographers, and veteran staff who witnessed the grand dame’s final performance in her greatest role: herself as an icon and ultimate star.

‘When Bette Davis Bid Farewell’ is directed by Pedro Gonzalez Bermudez, winner of the 2012 Goya award for best short documentary for “Return to Viridiana,” and co-written by Juan Zavala. The film also features an exclusive interview with Kathryn Sermak, Bette Davis’ personal assistant who accompanied her to San Sebastian. Kathryn returned to San Sebastian in May for the filming of this documentary. Her interview took place in the same suite at the Hotel Maria Cristina where she had stayed with Bette Davis 25 years earlier. She shares with us – for the first time on camera – her memories of those days.

For more information about the Goya awards please visit: http://premiosgoya.academiadecine.com/home/.

INTERVIEW WITH KATHRYN SERMAK, AUTHOR OF MISS D & ME: LIFE WITH THE INVINCIBLE BETTE DAVIS